While studying the radiation of a black body, Max Plank discovered that the emission mechanism of radiation was not the one hypothesised by classical physics in the form of a continuous wave, but instead in the form of little “packets” called “quanti” quantistic physics were thus born.

The History of Surgical Lasers

While studying the radiation of a black body, Max Plank discovered that the emission mechanism of radiation was not the one hypothesised by classical physics in the form of a continuous wave, but instead in the form of little “packets” called “quanti”: quantistic physics were thus born. The value of Planck’s hypothesis was made evident by the work of Albert Einstein who referred to the “quantum” concept when explaining about the photoelectrical effect and gave it a definition in physical terms. This laid the foundations for the discovery of laser. The official history of laser dates back to 1954 when a completely new concept was introduced for producing electromagnetic radiation at the frequency of microwaves.

The ﬁrst device capable of amplifying and generating electromagnetic radiations by means of subatomic methods functioned at a frequency of 24,000 MHz in the microwave part of the spectrum.

It was called MASER that was the abbreviation of “Microwave Amplification by Stimulated Emission of Radiation”. In 1958, a work published by A.L. Schawlow and C.H. Towers proposed a method for building a maser for the wavelengths belonging to the visible part of the electromagnetic spectrum. In 1960 the ﬁrst optic maser or ruby LASER was invented by Theodor H. Maiman. From that moment on, in just over a few years various types of laser were developed, starting from the ﬁrst gas laser with continuous emission (helium-neon), and arriving at the argon and carbon dioxide lasers in 1964, before passing on to the neodymium laser (1961), and the semiconductor lasers (1962).

The ﬁrst applications in the medical ﬁeld involved ophthalmology, however by 1962 the laser had already been applied in dermatology and during those years the use of CO2 laser was also commenced for vocal cord surgery via the use of the surgical microscope.

Laser Principles
In today’s language, laser means a device capable of emitting a beam of a specific light radiation characterized by high mono-chromaticity, extremely low divergence, and high coherency. The radiations emitted by laser devices may be visible, as in the case of ruby laser or hellion neon laser, but also invisible to the human eye when they emit in the ultraviolet or infrared, like YAG neodymium, and in particular, the CO2 laser.

If we consider a sinusoidal trend: the frequency is linked to the periodicity via which the electromagnetic radiation is repeated in time, and indicates the number of oscillations per second (if t is the sinusoid period ν = 1/t).

The wavelength is instead linked to the periodicity in space, and indicates the distance after which the wave is repeated, or in other words, once at period is ﬁxed, the distance covered by the wavelength in that lapse of time. These two magnitudes are linked together by the relationship: ν = c/ where there is the speed of light, or more specifically, that of all the electromagnetic radiations (2,9979 x 108 m/s). How does laser work? For the sake of simplicity we shall consider a physical system with only two levels of energy, E1 and E2, and an electron e- in the lower level E1.

If an electromagnetic wave equipped with a certain energy, and with a suitable frequency (capable of complying with Planck’s law hV = E2-E1) hits e; it is very probable that it will transfer part of its energy to

e. The energy transferred confers to e, which prior to the impact was found in a condition of balance with E1 energy, an excited state with greater energy: E2.

Spontaneous Emission
A certain period of time after the stresses that created imbalance in the e- system have ceased, it will spontaneously take itself to the level of E once again transferring the energy initially acquired via the emission of an electromagnetic radiation, called a photon; this phenomenon is called spontaneous emission.

Planck’s law
The radiation emitted to restore the system’s balance has the frequency ﬁxed by Planck’s law (ν=D/E/h), however the phase the direction are completely casual.

Coherence
This phenomenon is called stimulated emission and allows to obtain the ampliﬁcation of the incident radiation. The stimulated emission may also be considered as instantaneous, contrary to the spontaneous one that depends on the time the material takes to decline. It is evident that in order to have stimulated emission, the system must not be found in equilibrium (in this case the radiation Ei would simply be absorbed!).

The pumping energy therefore serves for taking the system out of balance and creating the so-called population inversion. The pumping of the active material that supplies the laser emission can be:

The active medium is enclosed in a tube (resonant cavity) and pumped.   The cavity is called resonant as it has mirrors at both ends and the photons emitted bounce from one mirror to the other, continuing to cross through the medium, hitting other excited atoms and stimu-lating the emission of other photons, all with the same frequency and phase.  This process is deﬁned as optical ampliﬁcation.

After having triggered the emission stimulated inside the cavity the intensity of the radiation increases until it reaches a condition of dynamic balance, meaning when the gain due to the optical ampliﬁcation equals the loss in the cavity. The geometry of the cavity contributes to the directionality of the light emitted seeing that the photons not coinciding in a parallel manner with the mirrors tend to exit naturally from the cavity. 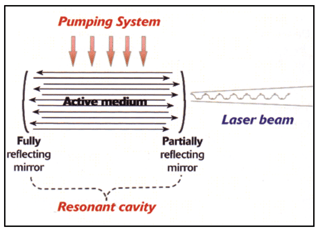 If one of the two mirrors has been rendered semi-impermeable, meaning that it lets a certain amount of light pass outside, this represents the perfect situation as the light beam that exits from the cavity is therefore the laser beam and the device has

Continuous emission.
The light beam has Gaussian characteristics, in other words, it has extremely low divergence and elevated collimation. A helium neon laser beam (the red one used as a pointer) with a minimum exit diameter equal to 1 mm, produces a luminous circle of only 8 mm at a distance of 10 km!

Laser Pulse Duration
We have seen how a laser light beam with continuous emission is generated (constant conditions). A laser can also operate in
pulsed mode, meaning that it emits light pulses that are re-peated in time at a speciﬁc repetition frequency. In order to have a pulsed emission the pumping system is activated and deacti-vated, otherwise the exit window is made semi-permeable for set time periods.

The pulse can also have a variable duration, in ms, μs or ns. This time duration is normally indicated by T. In the pulsed emission the energy is delivered intermittently, therefore with continuous emission we will have greater peak powers compared to the average power and energy supplied. The shorter the emission duration, the greater the peak power.

What are the benefits of being able to modulate the emission of the laser radiation?
The diverse emission modes have a marked influence on the bio-logical effects of the laser on the tissues, like the cutting depth for example. This is directly correlated to the power density, whereas the thermal impact is directly correlated to the quantity of energy released into the tissues. As a result, depending on the elevated peak powers and low energy contents, the management of the pulses guarantees the efﬁcacy of the cutting with a low thermal impact. In the ﬁeld of pulsed emissions (PW) the most delicate is called superpulsed (SP) Some useful concepts:

A pulse consists of two phases following one after the other: one with light emission (ON) and the other with no emission (OFF). Therefore t or t-on indicates the duration of the phase of light mission, while t-off indicates the lack of emission. T represents the entire duration of the pulse: T = t-on + t-off and can also be deﬁned as the period between two consecutive pulses. The opposite of this interval is the repetition frequency of the impulses f = 1/T which is indicated in Hertz (Hz). 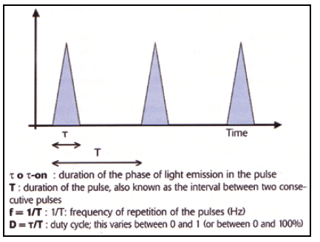 Duty Cycle
The amplitude D is called the duty cycle. This represents the ratio between t-on and the period T(D = t/T) which may obviously vary between 0 and 1. It is usually expressed in percentage and therefore oscillates between 0 and 100%. In other words, the duty cycle represents in percentage, how long the emission of light lasts in each pulse. With a duty cycle of 100% the emission is constant and the laser does not emit in pulses.

ML030
It is important to note how long t-off (low duty cycle values) favors the dissipation of the heat in the tissues in the vicinity of those ablated. In the case of the ML030, the duty cycle is preset in order to respect the tissular thermal relaxation time. In fact, in PW the maximum duty cycle is 40% dropping to 1.5% in SP mode at the minimum power (0.5W).

Coherent Beam
As we have seen, the laser light exits from the device as a coherent beam, in other words, all the photons travel in a parallel fashion and in the same direction. 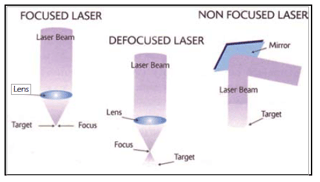 Lens Focusing
If no lenses are interspersed along the pathway of the beam, the light will not be collimated and due to the short distances from the source, the surface of the area hit will be relatively circular with a diameter of 8-10 mm. With the interspersing of a convergent lens along the pathway of the beam, the energy will be focussed on a small area (150 – 300μ) obtaining a very high energy density.

Handpieces & micromanipulators
The lens forms a cone of light in which the apex corresponds to the focus and the height represents the focal distance. The lens is positioned inside the distal section of the handpiece, and by varying the handpieces (50, 100, 125 mm) it is possible to operate at different distances. With the use of micromanipulators you can even reach focal distances of 400 mm.