The Truth Behind Opiods

Solving the chronic pain crisis has stumped the medical community. American media has blamed chronic pain and prescription painkillers for the opioid epidemic, which President Trump declared “a public health emergency” in 2016.

With the stigma of prescription opioids at an all-time high, Judy Foreman’s A Nation in Pain couldn’t have come at a better time, albeit a little too late. In A Nation in Pain, Foreman explores how chronic pain has grown into a full-blown health crisis that affects over 100 million Americans. In our last blog post, we learned that there are several factors attributed to the chronic pain crisis…

Foreman goes on to explore opioid painkillers, their effectiveness, and the rates at which they’re prescribed in the United States. In light of her research, Foreman finds that prescription painkiller abuse only may play a small role in the opioid epidemic. She argues that prescription opioids are a viable form of pain relief that not nearly enough chronic pain sufferers have access to because of the stigmas.

Until the opioid epidemic came to national attention, the chronic pain problem went largely unnoticed. Opioid overdosing has killed over 64,000 Americans in 2017 alone, and now, the federal administration is working to bring non-opioid medications on the market. While these medications are beneficial in bringing pain relief, prescription painkillers are not nearly enough to fix the chronic pain crisis. The way we treat chronic pain in the United States needs to change.

Pain itself began to be seen as the “fifth vital sign”, a measure that should be assessed regularly in hospitals, along with a patient’s pulse, temperature, respiration, and blood pressure. Medical ethicists, too, began to argue that pain relief should be viewed as a fundamental human right – and the lack of adequate pain relief as akin to malpractice, even torture. – Foreman (p.132)

Throughout the 19th and 20th centuries, doctors began to implement opioids more for the treatment of pain. But by the 1920’s, the federal government began to enforce legislation that prevented doctors from prescribing them to patients in need.

It wasn’t long until American doctors began to protest the federal government for its crackdown on opioids. As a result, the federal government went on to lift these regulations and doctors were allowed to prescribe opioids to patients suffering from life-altering conditions and diseases, such as cancer. Over the next couple of decades, opioids started to treat a wider population of patients, particularly those suffering from mild to severe chronic pain.

So, why are painkillers so under-prescribed in a society where over 100 million people suffer from chronic pain? Even though the federal government lifted their abolitionist attitude towards opioids nearly a century ago, the stigmas attached to opioids are largely to blame.

The Damaging Stigma of Opioid Abuse

Opioids have been long synonymous with words like “dope” and “smack” largely because of heroin and painkiller abuse.

To a degree, there is some validity behind the opioid stigma. In 2007, there were a reported 12 million Americans who used prescription painkillers for non-medical, recreational use (p.129). It’s no secret that opioids are highly addictive.

Some people have become addicted to their opioid prescriptions, and some wind up turning to heroin because it’s cheaper and easier to obtain. This in addition to the people who abuse opioids has led to belief that doctors hand out prescription opioids too easily.

According to SDI Vector One National Database, a private patient-prescription tracking service, there were 200 million prescription opioid medications filled in 2009 (p.129). This number would seem very high. However, when you subtract the 100 million chronic pain sufferers, and those who are prescribed opioids after injuries and surgeries every year, over-prescription may not be as rampant as it seems.

In fact, doctors are heavily regulated when it comes to prescribing opioids. Foreman explains how the federal government has cracked down on pharmacies and doctors offices for decades. There are a number of agencies that combat drug abuse and monitor pharmacies and prescriptions… 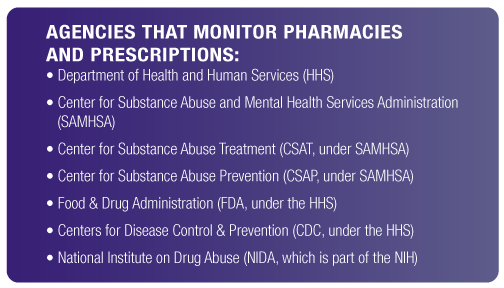 Additionally, the DEA goes after drug dealers and pushers, while the National Drug Intelligence Center (NDIC) works directly with and collects data from law enforcement. Pharmacy robberies are also a daily occurrence in our country, and the FBI investigates these, as well.

With so many organizations and agencies on the prowl for prescription abuse, many doctors have become more cautious when it comes to prescribing opioid painkillers. To an extent, some believe it’s a good thing that doctors aren’t so willing to prescribe opioids. But the stigmas attached to opioids take away the real benefits of them.

Stories about abuse and overdoses – especially in the wake of the opioid epidemic – has heightened the general public’s fear of painkillers. Additionally, the federal government’s strict drug policies have made the public more paranoid of painkillers than ever before. Doctors aren’t just afraid to prescribe because of the federal regulation either – In chapters 7 and 8 of A Nation in Pain, Foreman explains how doctors still don’t sufficiently understand how to administer pain medications safely and how to assess patient risk for substance abuse.

In 1961, the Single Convention on Narcotic Drugs came to an agreement that drugs that relieve pain should be more readily available. However, this has gone unfulfilled. 80% of the world’s population still doesn’t have “adequate access to treatment for serious pain.” (Foreman, p.139) And while these drugs are alleviating the symptoms of pain, they aren’t treating the underlying causes – they simply mask the issue.

Though Foreman advocates for prescription painkillers, she highlights how opioids are capable of reducing “persistent pain only 30 to 40 percent.” (p.128)

Even though they’re only effective to a certain extent, opioids are addictive, nonetheless. Foreman interviews a handful of individuals, including a doctor, who not only suffered from chronic pain but severe opioid withdrawal. The problem is that opioid withdrawal is so powerful that many chronic pain patients feel they have no other option but to keep taking painkillers.

Still, doctors are learning about how to safely wean their patients off prescription opioids. It seems that the most beneficial method involves a very slow decrease in dosage. One doctor that Foreman interviews learned firsthand about how long this method takes. He believes that patients should only taper down their dosages once a week over a period of three months.

But this method may not work for certain patients. Some patients, whose dependence turns into full-blown addiction, undergo methadone treatment. Methadone is an opioid that provides pain relief while soothing the side effects of withdrawal. Unlike other opioids, methadone does not produce a “high”. This is one of the reasons why methadone is a widespread form of detox therapy for recovering heroin addicts.

There’s also multimodal therapy, which addresses both pain and withdrawal treatment simultaneously. With a combination of 2-3 opioids and other non-opioid pain relievers, patients can block out certain side effects and reduce the chances of overdosing all while relieving their pain. Multimodal therapy has proven effective for many patients, but researching this method of treatment is still ongoing.

Prescription painkillers seem to only be a band-aid that provides short-term relief for the very large wound that makes up the chronic pain crisis. They’re highly stigmatized in this day and age, but they seem to be one of the only forms of treatment that can relieve chronic pain.

Still, prescription opioids are not the only solution out there. Alternative medicine has rose to prominence amidst the development of modern technology and medicine. Many chronic pain sufferers today are finding relief through alternative medicine, and we’ll explore these forms of treatment in our next blog post.